Letter to Harper from Halfway to the Horizon

Dear Stephanie: No one connects here, and no matter
how resolutely we trudge forward, ignoring spinal fusions
and attacking hearts, the line skips lightly ahead, mocking us,
I think, in that way only the ineffable may claim. Looking
out, I see a lone wren, clouds filtering the stars, and strands
of barbed wire looped like question marks around cedar
stumps, punctuating the day’s greeting. No answers there,
only more inquiries blanching under the sun. But this
is my febrile landscape, not your lush green headed by
gray. Nothing matters, or, everything’s imperative.
In this gnarled season I can’t tell which, although
the vulture ripping into a squirrel carcass on my
suburban front lawn tells me something ain’t quite
right. Full or empty, the glass is still a glass, despite
my propensity for seeking more, whether cava or beer
or yes, enlightenment. I fear this reveals too much
about me, and wonder if I should draw the shade or
keep tugging it higher, admitting more light. Have you
ever noticed that half often amounts to less the closer
you get to it, each portion diminishing, divided by two,
and again, until only a thin shadow vaguely resembling
the original shape remains? Perhaps this is how we’re
meant to exit as failures on this field. The horizon’s
still there, red stroking green, clouds feathering in,
and maybe if we keep walking we’ll reach it in a sunburst
of doves and glittering red dahlias. Yeah, right. In the
meantime, let’s multiply our losses and sculpt another
morning truer than its source, stronger than its media. Our
optimism has already blown this joint. What else have we
got to lose? I remain, as ever, yours in insolence, Bob.

While Looking Up at a Working Wasp, I Trip

How do these things I once barely acknowledged
now snare toes or twist ankles, causing me to stumble,

Solitary wasps mate not in flight but in the vicinity
of their nesting area. Three years ago a female

violated our unspoken agreement of mutual
existence; my arm purpled and ballooned

to twice its normal size, and I demolished her nest
for fear that attacks would become habit. Today,

another builds in the same spot. I stoop by,
beneath notice, as she labors to make room

for eggs fertilized with stored sperm from a single
drone. Such diligence should earn rewards.

I stroll to the mailbox and marvel at their ability
to manufacture wood pulp for nests, how

certain species avoid mating with siblings
on the basis of chemical signatures, and that

they voluntarily control the sex of their offspring.
Ah, the wonders of nature! Approaching the door,

I look up and observe the growing nest with
admiration, enter the house without stumbling,

and inhale the fragrance of the perfectly arranged
lilies. The books on the table entice me, so I

pour a glass of malbec and thumb through them
with great pleasure. Soon, after sunset, she will die.

This talk of destiny and exceptionalism and the incessant
push towards terror inflames my metaphorical innards.
Birds may kill, but they don’t practice genocide and never
erase history’s missteps with published falsities; their songs
remain true. Not so with man. What grows importance is
not what you hold but what another has in his grasp, no matter
how tenuous. I think of water and how some would charge
for the right to drink, or withhold it from those who cannot
pay. And air? Whose breath defines the dollar? Or the fear
that a distant neighbor might receive a benefit that you
neither need nor desire. Crows claim territory but roam
with the season, adapt as necessary. While they may provoke
curses in their wake, their damage is temporary and they
don’t poison for profit. If I could leave my post what station
would I accept? Having shared my days with sky-bound
friends, how could I choose another? They sing and swoop
and cooperate among the winds, taking only what they need.
They neither hoard nor covet. They steal but don’t swindle.
Their wings lift no grudges. Even gravity respects them.

My backyard shack centers me. It is my balm, the quiet between thunder and sunstorms, between pollen and scorpions, my gravity, my tunnel, the refuge I never knew I needed but most often seek. The glass door is “of a port in air,” and the east windows offer glimpses of this slice of the world from multiple angles: hummingbirds, wasps, bumbling beetles, rain, wind, grass, trees, weeds, and the sky in its infinite variety. Many of my books rest here, as do two guitars, a mandolin and a shakuhachi, a few pebbles, personal totems and the occasional dog. Here, I read, study, produce sounds (some moderately musical), ponder, procrastinate and sip tea. Sometimes I write, too. 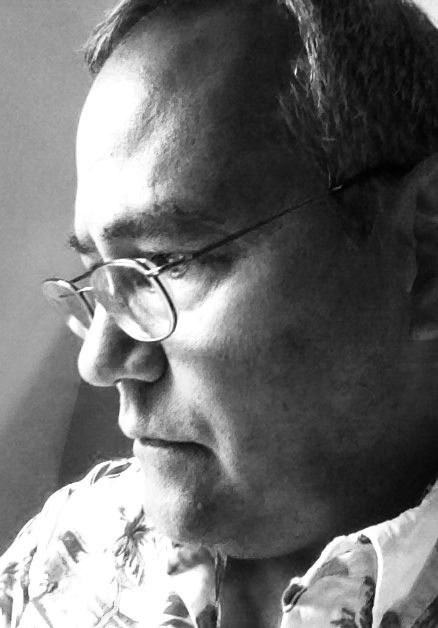 The author of five chapbook collections, two micro-chapbooks and a mini-digital chapbook, Robert Okaji writes in his backyard shack in Texas. He once won a goat-catching contest, and his work has appeared or is forthcoming in Slippery Elm, Vox Populi, Panoply, Hamilton Stone Review, The New Reader and elsewhere. His work may also be found at his blog: https://robertokaji.com