In September, the mother down the block
loses her child
at the same time the hunters come to town.
Twenty deer in the woods, foam rounding
over the spillway. And the smoke sucks in like teeth,
each belly open into wound,
salted by the earth and then the table.
What gives, what takes, bullfrogs bloated with pebbles
by the side of the road,
no word for the sound of the loss of sound,
mother’s truck over daughter’s body,
each vessel bursting like a seed,
and in the distance the antlers stack into towers.
The small shoe still there, lodged in the grille,
a fish in a net,
a doe sewn into a river.
No word for waking into a life
in which you took your own child’s away.

How to Live Without Fear

Against the quiet turning of the earth,
a farmer sets his fields alight
to make way for the new winter, stalks burning away
into sour ash. A boy drags his cat along a chain
and the river carries a new body into town.
How deep is now, my head against the floorboards,
each new beat a sonnet.
If a knife is to your throat,
you sing even without knowing the words.
Every thrust a dead end
and another coyote on the hill.
I was small that year, in that month,
in that moment.
And a murder of crows gathered in the corn
and took the light back into their homes.
When the body reached the town’s edge
I got up shaking, the way the hungry do
when they come to a grove. 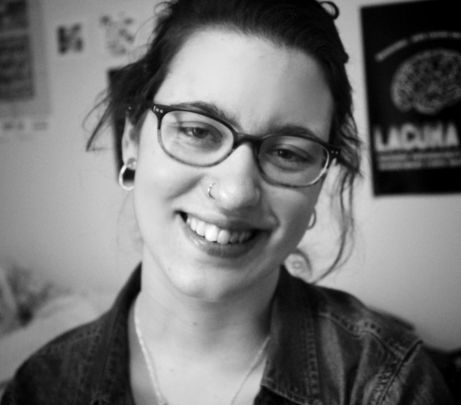 Meggie Royer is a writer and photographer from the Midwest who is currently working as an educator on domestic violence in Minnesota. Her poems have previously appeared in Words Dance Magazine, The Harpoon Review, Melancholy Hyperbole, and more.