Coinciding with Venus’s showy arrival–
something to behold on filled and moon void nights,

a different outcome for the aunt who died auspiciously,
the stolen suitcase filled with money,

the burnt sugar fields,
the hidden pistol beneath the linens,

from another language, the broken
pieces held in pockets, three generations removed.

Memories of the orange rind
peeling with the promise

of latitudes from the globe,
the scent of vanilla tobacco, a backlash,

where smoke took on shapes
of lurid rings and cursive letters exhaled,

before the stories with their chameleon
plots could start and end the same.

I watched my mother’s continuity,
how far it could extend,
that single minded purpose
never spliced or severed
from wherever she stood to the horizon,
the unequivocal seam she sought spanning
the distance to reach without a complaint
or deviation when she left for work
in navy, black or gray, her day long
attire for the living or the dead,
reconciling the inevitable
and leaving me to sleep,
to face the cool stucco wall,
painted the color of a fractured sunrise.

Without gravity I paint the moon,
how the strokes swirl like whispers
in preferred shades and hushed tones,
lavender emerges always
in the backdrop of my dreams
when I am somnambulatory
the knife spreads the subdued
beams and unbroken coronas–
my footsteps fade like laughter
swift then elliptic,
I stiffle those late night yawns
and prismatic searches–
trails of syllables converge.
The curtains printed with words
billow until they become voluminous
with meaning. 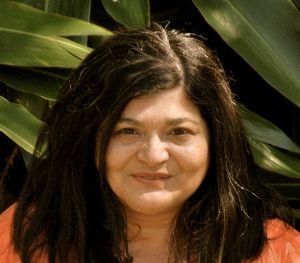 Gina Ferrara lives in New Orleans and has several collections of poems that include:  The Size of Sparrows (Finishing Line Press 2006) Ethereal Avalanche (Trembling Pillow Press 2009) Amber Porch Light (CW Books 2013) and her latest collection Carville:  Amid Moss and Resurrection Fern (FLP 2014).  She teaches English at Delgado Community College and is a guest artist at the Low Residency MFA Program at the University of New Orleans.  Her poetry has appeared in The Poetry Ireland Review, Callaloo, anderbo, Valley Voices and others.  She has received grants from the Louisiana Division of the Arts and The Elizabeth George Foundation.  In 2011, she was nominated for a Pushcart.  Since 2007 she has been curating The Poetry Buffet, a monthly reading series presented by the New Orleans Public Library.