When I learned that the Old Grand Isle Bridge was left burning
Overnight by a careless fisherman,
I felt a sense of loss and nostalgia.

That place, a refuge for late night rendezvous
The place we released to the wind
Ashes of one we loved who died too young
The ghosts of many known to have drowned
In the water below bridging timeless losses
Joining us to keen, to wail

Charred pieces of the bridge, now flotsam,
Deposited on the beach by rhythmic, lapping waves
Our lost friend
A piece, a keepsake now cherished
Memory into myth.

Gentle rolling highways through
Northwest corner, near the toes of the Ozark foothills
To the marshy toes of the boot-shaped state,
Host to cultures with unexpected wonders.

Acres of standing pines
Singing a river song in soft breeze,
The pounding of mechanical pumps on gulf waters
Pulling oil from primordial depths,
Singing a different song than those
Who fish the salty waters and
Chank-a-chank in a different language.

Pining for the old days
Before those sounds were known.
When pelicans filled the sky and
Seagulls shouted joyful finds of
Fish schools too vast to measure,

When Grand Isle’s shoreline was
Not yet dotted with platforms,
Christmas tree lights, and natural gas torches
Reaching thirty feet above the horizon,

When marshland covered itself in
Vibrant colors of migrating flocks,
Wings slapping salty humid air,
When my father and his father before
Had only one care — that day’s catch.

Catching now the scent of pine,
I remember his face as he retold
From childhood memory how
Plentiful our cadie once was
Before Louisianians pined. 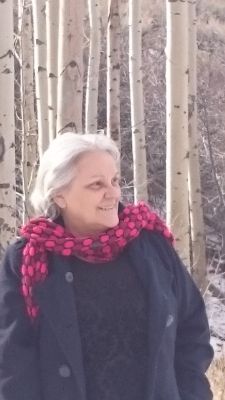 Louisiana native Bessie Adams Senette has published her first book, Cutting the Clouds, a Bayou Mystic’s Poems, Musings, and Imaginings.  Senette is an author, healer, public speaker, and ordained interfaith minister. She lives in Lafayette, Louisiana with her husband of 35 years. She has two sons, two daughters-in-law, four grand-pups and one cantankerous grand-cat. The delight of her heart is being a supplemental grandmother to the precious four-year-old and nine-month-old humans, Eden and Noah.