To Live Is to Fly

When you told me, I had found
the world and horizons enough
to push against, had seen the sky
its withering expanse
through fingers weaving
as we grasped the earth to climb
soil, stone on which to perch ourselves.
All below seemed thriving, pulsing
as a storm with no rain
falling, save to this rhythm
to splash and shatter against
the batterhead of a conquered drum.

There’s a familiar song
whose lyricless rhythm I keep
tonguing against your breast,
whose melody is an egress:
parade of ale-soaked moans,
hush of street sweepers
along the backroads,
deicers spreading salt
ahead of the morning freeze.
We lie open-eyed to remember
the words instead of admitting
to improvisation, needing to grasp
at the worn edges of a familiar song
rather than invent a new composition.

Day Comes to Bury the Crickets

An exultation of larks ascends
from the horizon. Their song
accompanies the sun’s arrival,
engulfs night’s chatter.
They lay the pall of light
upon the pines. Dawn
inters the hymn of dusk.

I saw you in the field,
tilling the ground,
heedless of the hour, breaking
the darkening soil. I do not know
why you kept at it,
doing work for work’s sake,
collecting sweat in the air
around the curve of your back,
cold and endless upon the shoulder of the world. 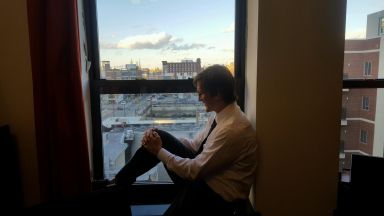 Nolan F. Meditz was born and raised on Long Island and received his MFA from Hofstra University in 2014. His poems have appeared or are forthcoming in Roanoke Review, The Wild Word, AMP Magazine, Narrateur: Reflections on Caring, and Eunoia Review among other publications. He is currently pursuing a Ph.D. in English with a specialization in Rhetoric and Composition at the University of Louisiana at Lafayette.