Right now my brother is probably
learning how it feels to write his first song.
It would be about the shock of rain
on his fresh-shaven face, my own age.
He is just learning to hold down the strings
so they don’t muffle his beautiful sound.

He loves major chords. He tries to fret
C and D and E. He even asks me
for advice: you’ve played since
our 8th grade year, could you
show me this? I take the polished neck
from a hand just like my own,
and finger a chord, my index
spanning two strings.

He practices for hours. We sit together
as he learns to hold the strings down.
When he masters his chord,
the rain falls from his strong face
and into the wet ground. 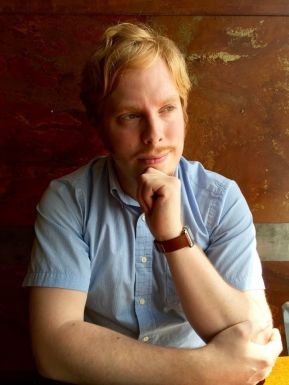 Tyler Sheldon earned his MA in English at Emporia State University, where he taught Composition and received the 2016 Charles E. Walton Graduate Essay Award. His poetry has been nominated for the Pushcart Prize, and has appeared in journals throughout the US and in Canada, such as Quiddity International Literary Journal, Coal City Review, The Dos Passos Review, The Prairie Journal, and others. His chapbooks include First Breaths of Arrival (Oil Hill Press, 2016), and Traumas, forthcoming from Yellow Flag Press.