He had been watching the news throughout the day with his mother in hopes of seeing the world end. I said, “Hey, man, you all right?” He said “Hi,” but that was it. Shadows contributed extensively to the architecture of the neighborhood. I was touched by the gesture as I had just recently seen a demonstration of robots versus kung fu. A woman on the verge of panic rushed out from between houses into the last of the light. She wanted to sign my petition. It was shaped like a combat boot.

Who I Really Am

Posters lining the interior of the bus advertise one or another of eight explosive facts about orgasms. If you’re at all like me, you imagine a difficult future in which you need help with when to use @ and when to use # on Twitter. I hop off the bus before anyone can ask who I really am. The sky is erupting in the distance in purples and yellows and reds. My eyes fog up at the sight. The ancient Chinese recommended the healing power of a dog’s saliva. I hurry on, clutching to my chest a small dog that doesn’t realize he’s missing. 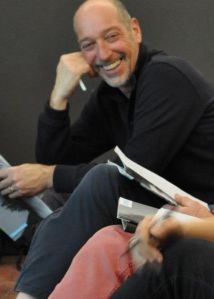 Howie Good’s latest poetry collection is Dark Specks in a Blue Sky from Another New Calligraphy. He is recipient of the 2015 Press Americana Prize for Poetry for his forthcoming collection Dangerous Acts Starring Unstable Elements.