“There is something important in the Way, called the ‘Ying-Yang’ foot, and is considered essential.”
-From “Musashi” Translated by W.S. Wilson

I believe in fist and sound.
A dead song among 10000 strikes
Crushing sand.

Soon I will be released into the lights
From the shadowed stage:

The emptyside in the black shadows.

Eyes scanning, tunneled
Testing the perimeter of my free will.

I am sweating, stone colder
Than any “Sunday-Sinners-Sentiment.”

I can see sounds smuggling
The mangled, murderer of chance:

Some say its glory, some say redemption
When actually, it’s the music we are after.

The sound of victory.
The rusted metal loosened by sweat.
I know this sound, it is favorable to me.

I speak to myself in a quiet circle.
In a quiet conscience.

I am the words in the fight sentence.
I am the sign of the battle compass.
I will begin this ceremony with a smile
From the inside out.

A will-inflicting checking of survival
Until the stoppage.

Hands raised
And I can hear the music again. 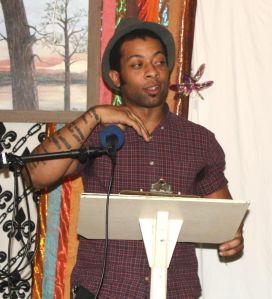 Charles Garrett, has published no books; has no published collections for you to buy or pretend to care about. He has no stake in making you like him or his words, but you will undoubtedly love his voice. He loves cooking for his son, and learning the extremes of his own tolerance. He is not a “teaching artist” nor a professional one, but will gladly talk and share with anyone, willing to listen. He believes poetry is in the way we bleed, not how much we do so.