This Hanging On
after Ron Houchin’s “World of the Dead”

I thought once: It is a recruiting of throats and lungs
for speaking in sleep, or walking with their feet,
hiding belongings as if they still belonged to you.

This is the drawn out argument we have with death.
Determinedly unconvinced, hitching rides on others,
on the insides. In this chapter we’re inhabited thickly

with the living, an inter-veiling and so strangely close
as to speak to one another in the same voice at times,
interrupting in mirrors, a glance just too familiar

in some of the aged photos mostly forgotten. No
one explains if it’s a choice made to hang around,
this infiltration of another’s days. Who would truly

want such a thing, even in death? A constant reunion.

.
Fingers are such common injuries.
My father half-stamped through
his right index finger, leaving it
machine-mangled and unbendable.

My great uncle stumbled into the office
from the pattern shop, face ashen,
bleeding all over the floor. A band saw
had taken the tips of two fingers off
at clean forty-five degree angles, back
before they could sew them back on.

My father was a welder, working
under, around, inside, and on top of
hundreds of thousands of tons of steel.
He’d point out things he’d melted together
everywhere we’d go: That coal tipple.
That grain chute. That staircase handrail.
Those I-beams. That clean weld there.

A little of his handiwork scattered all
over, marking my hometown with hints
as to who my father is when I see
these reminders still standing years later.

Do you know how long you have to crush
and catch and clip your fingers, and burn
and break your flesh to finally lose your
fingerprints? For the skin of your hands
to run smooth it’s been roughened so long?
How many layers of skin you lose,
grow back over a lifetime of peeling
and cracking winter and summer hands?

We regrow our bodies at the cellular level
every seven years. I’d say these men regrew
their hands every year. But for some,
no matter how hard they worked and wished,
whole fingers just never would grow back.

.
Breathless grunts of a newborn,
half frustration, half amazement,
neither remembered by old age.

That ill-definable desire
for things unreachable
as a pristine, invalid,
alien child: a floating

When we are in the midst
of this stage of being, can we feel
any literal root in the old stardust,
as newly gathered swirling?

Galaxy of our own astonishment. 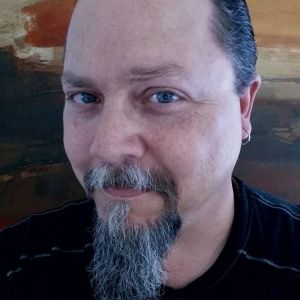 Larry D. Thacker’s poetry can be found in over sixty magazines and journals including The Still Journal, Poetry South, Mad River Review, The Southern Poetry Anthology, Mojave River Review, Mannequin Haus, Ghost City Press, Jazz Cigarette, and Appalachian Heritage. His books include Mountain Mysteries: The Mystic Traditions of Appalachia and the poetry books, Voice Hunting and Memory Train, as well as the forthcoming, Drifting in Awe. Visit his website at: www.larrydthacker.com.

One thought on “Larry D. Thacker”