i.
A rider waters his horse in the park at dusk,
ushered in, thirsty at the water’s edge.

Around each of us
the isolating quiet of one’s own breathing—
the lungs, the long open airways—
and the drinking of dark waters.

ii.
In 1949, sculptor Marino Marini
sits for a photograph
on the back of one of his Riderless Horses,

his limbs stiff and outstretched,
his head thrown back,

as if the horse were new again,
and he, surprised, grateful,
grown tired and older,
could see how beautiful
and say, “how beautiful,”

riding a myth of his own making
and allowing himself to be taken.

No wonder we are so tired—
we spend so much time holding back.

iii.
The knitted skulls of yearlings,
bleached on the mudflats,
look like horses crossing deep water,
small wakes of progress
widening from their heads.

On the walls of underground galleries:
wild horses, extinct deer,
a newborn still tethered to its mother.
The ancient painters found their way in the dim light
of lamps fueled by animal fat,
single flames wavering in dark chambers.

iv.
Late in a museum’s upper gallery,
one of Marini’s Riderless Horses
silhouetted against a fading light,
a smudge, a blur—
how like a daguerreotype
the great and small gestures of being here.

Horses galloping in their dream stalls,
or across the minds of caves,
or in Muybridge’s still photograph at Palo Alto—
not a single hoof touches the ground.

v.
That semblance of joy you feel in the dust
is an elegant chaos of legs holding you above the surface.
No wonder we are so tired.

We are allowed into the privilege
of some moments—I don’t know how.
The horse in the park raised his head
after drinking—yes.
The horse, the rider, and I—yes—
the smallest bones in the night’s dark skin
each performing its vital function. 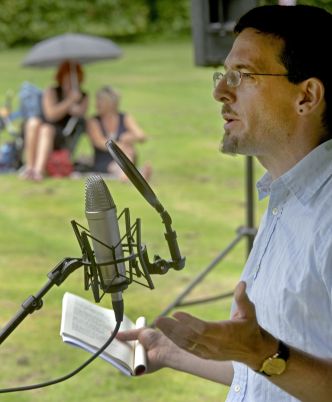 Stephen Frech has earned degrees from Northwestern University, Washington University in St. Louis, and the University of Cincinnati. He has published three volumes of poetry, most recently The Dark Villages of Childhood (2009). His fourth volume titled A Palace of Strangers is No City (2011) is a sustained narrative of prose poetry/flash fiction. He is founder and editor of Oneiros Press, publisher of limited edition, letterpress poetry broadsides. Stephen Frech is Professor of English at Millikin University.