The Girl With Chameleon Skin

The girl with chameleon skin
knocked on my door.
I opened it and saw nothing
but hard morning light
distorting around a vaguely human,
pavement-colored shape.

I moved back and watched
her watery movement from exterior
to interior, her skin shifting to carpet
to hardwood. My mouth found hers
and she became my flesh. We moved,
slow as epochs, to the bed where she
melted into the sheets and became linen.

My tears dissolved into her
as though they had never been
and she laughed, a bright sound
merging with the heaven beyond
the ceiling, beyond the tapered clouds,

where chameleon girls are seen
for who they are, not just imitations
of life under a sad man whose body
does not know the hazards of change.

I Caught Your Eye

I caught your eye
as it floated away from you
that strange, purple evening.

Just an old parlor trick,
you said, smiling, plucking
your eye from my palm
and dunking it in whiskey
before screwing it back in place.

Later, as you slept, the soft
train of your snores rolling
across the bed, I watched
your eyes vibrate beneath their lids–
not REM, but telegraphed desires
to float again, to be free,
without anything getting in the way. 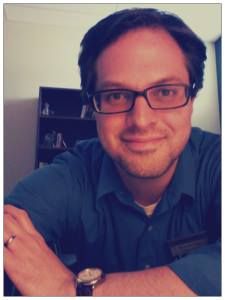 By day, Robert Crisp teaches writing and literature at Armstrong State University in Savannah, GA. By night (and day, if he’s going to be honest), he writes poems.